KFC is known for creating one-of-a kind chicken dishes that are most of the time frowned upon and odd for traditional and casual fast food diners.

After the return of KFC’s Double Down and Famous Bowl, it launched Chaco— a dish we admittedly found weird.

It’s been a month since Chaco was launched. By now, some of you may have already tried this but we still feel like sharing our thoughts about this newest chicken innovation. 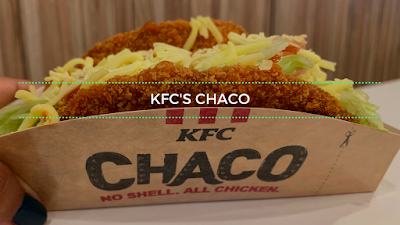 True to its claim, “no shell, all chicken,” Chaco used chicken taco shell instead of corn taco shell.

The breaded chicken is folded like a taco and is stuffed with real taco fillings including shredded lettuce, salsa, corn, taco spiced- mayo. It is also topped with lots of grated cheese.

Taste? It's not bad. Chaco did taste like a true taco sans ground beef and beans. 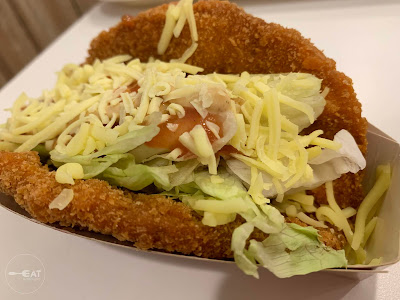 We were surprised that a la-carte Chaco was truly filling. Its length was just right for its fillings, even longer than regular tacos. 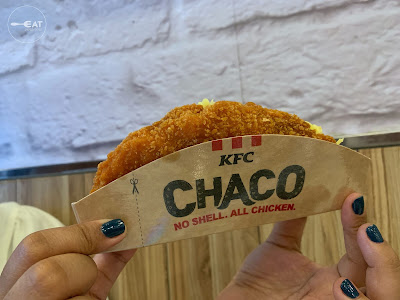 It must have been the breaded chicken that holds it that made it a heavy meal. The chicken taco is crispy and meaty but it is not oily like Double Down.

We’re also crazy about the salsa because it is flavorful and tastes just like a regular taco salsa without trying hard to resemble Mexican ones. They are generous with the shredded lettuce and tomatoes. The corn stuffing may not be for all but we like its inclusion.

You can avail a la-carte Chaco for only P99 for a limited time only.

If you want to add fries and drink it will cost you P145 and P219 for Chaco Fully-loaded meal, already with classic / spicy fried chicken and chicken spaghetti. 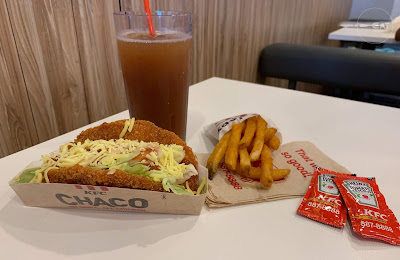 For The Eatventurers, though, the a la-carte Chaco is already enough. It is heavy and complete as it is.

Is KFC's Chaco worth trying out? BIG YES!

Is it worth coming back for?  YES!